​History of the Rheinischer Verein 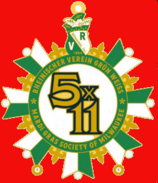 One of the oldest customs in Germany, especially in the Rhineland is Mardi Gras, also known as "Karneval", dating back to the middle ages. The word "Carneval" actually is composed of two latin words "Carnis" (meat) and "vale" (farewell) and therefore literally translated applies only to the day before Ash Wednesday, when people would be allowed to eat meat before fasting for the lenten season.

The Mardi Gras season itself comprises the time between Christmas and Lent, a period of time when there was not too much work to be done on the farms and urban business communities and therefore presented a good opportunity for feasting celebration. Karneval became the time of the year when people took life more lightly and were allowed to ridicule their local authorities in a joking way, and to criticize politics and other questionable government practices.

Each season a mock prince and princess were elected to rule their section of the country, being assisted by the Council of Eleven Jesters, representing the counterpart of the ministers of the country.

To carry this tradition and to keep this custom alive the Mardi Gras Society of Milwaukee (Rheinischer Verein “Grün-Weiss”) was founded in 1964. A Prince and Princess were crowned ever since, this years royal couple being the 44th in this club’s history. The club is dedicated to the culture and heritage of their forefathers, and until 1964, when this club was founded, the custom of Mardi Gras was relatively unknown in Milwaukee. The founding members came from Rhineland of Germany, and grew up with this well liked custom which was celebrated in and around Cologne, Düsseldorf, and other cities along the Rhine River.

Even though the official Mardi Gras time starts around Christmas and ends Shrove Tuesday, the day before Ash Wednesday, certain highlights begin before, such as the coronation of a Prince and Princess, usually the first weekend after the 11th of November of each year. The crowning of the royal couple is one of the most colorful gala affairs in the German Mardi Gras tradition, where pageantry and tradition will always be in the foreground, where the guests are impressed with the colorful uniforms, the elegantly dressed Court of Honor, and all the pomp and splendor displayed.

The first elected president of the Mardi Gras was Mr. Joseph Dorp, who grew up in Cologne, the largest city in the Rhineland. So were Mr. and Mrs. Günther Nagel, who were coronated as the first royal couple. They came from Düsseldorf, another stronghold of the Mardi Gras or Karneval custom.

Others followed and by the end of 2003, thirty-nine royal couples had been crowned by Fest President Reinhold Ellerman, who celebrated his 39th coronation anniversary in November of 2003. This year we will be crowning our 45th royal couple.

Even though Mardi Gras in Milwaukee is not celebrated with the enormous pomp, ceremony and splendor displayed in cities like Cologne and Düsseldorf, we are known for celebrating this custom with an enthusiasm, which comes from the heart, even surprising visitors from Germany, who have come to Milwaukee to participate in the festivities. The first club house of the society was the former "Steuben Lounge" on North Avenue. Next stop was the "Brewers Chalet" on Good Hope Road, followed by the "White Coach Inn" in Thiensville, a northern suburb of Milwaukee. The final move was made in 1997 to the "Bavarian Inn", where monthly meetings and some of the smaller Mardi Gras celebrations and festivities are being held.

With the growing popularity of the Mardi Gras Society, it became necessary to find larger, more spacious and suitable ballrooms to hold some of the major gala affairs, especially the coronation and colorful masquerade balls, which at times attracted over 700 guests. The “Plankinton House Hotel” proved to be too small, making it necessary to move to the “Marc Plaza Hotel” (the former “Sheridan-Schröder Hotel”). The next move was made to the renowned and elegant “Pfister Hotel”, then the Wyndham Milwaukee Hotel. Now the Coronations are held at the Crowne Royal Hotel. Over the years, it became apparent to honor certain members for their outstanding and dedicated service. For this reason a special medal was created in 1971, “The Medal of Good Deed,” which is awarded only once a year to a worthy member. Over the years some members were made honorary members of the society for their contributions to the cause of Mardi Gras.

During those years, close contact has been established with other Mardi Gras societies in the United States, Canada and Germany. In 1974, the Society was made honorary member of the “Duisburger Hauptausschuss,” the umbrella organization for all Mardi Gras societies in the city. Since the founding in 1964, nine members have been elected by the membership to lead the society. They were Joseph Dorp, Günther Nagel, Horst Gründler, Erich Würtemberger, Klaus Hüppe, Helmut Schubert, Hans Lux, Klaus Fromme, Mark Semrow and since April 2010, Klaus Fromme again. The uniformed members and groups consist of a policeman, Jr. prince and princess, wine cup bearer, the high council of eleven jesters, the Prince’s honor guards, the royal couple’s personal escort, one each for the prince and princess, certainly the most important members, and the fest president. Over the years, the Mardi Gras society of Milwaukee has developed into one of the major societies among local German Clubs in Milwaukee and is largely responsible for keeping the tradition of Mardi Gras alive, and certainly has accomplished its goal.